There was no sense of deja vu for me. And this is because, I think, the physical force of those celluloid waves made the occasional glimpses of Hashima island little oases of calm; the colours, particularly the reds and greens (anything except blue-gray), were like a balm. And here were shapes and objects that stayed still, as opposed to twisting and turning at odd, acute angles. I hadn’t seen Hashima like that before.

One image did occur to me in the aftermath, and that was JJ Grandville’s ‘Juggler of Universes’ from 1844, where any notion of a cosmic harmony is wrenched away by a laughing, manic buffoon-figure, such that perverse chance holds sway. Hassall, biographer of Hashima, juggler of universes. 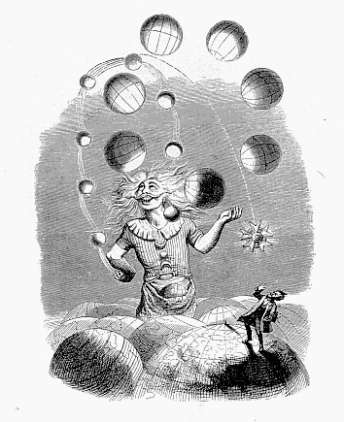